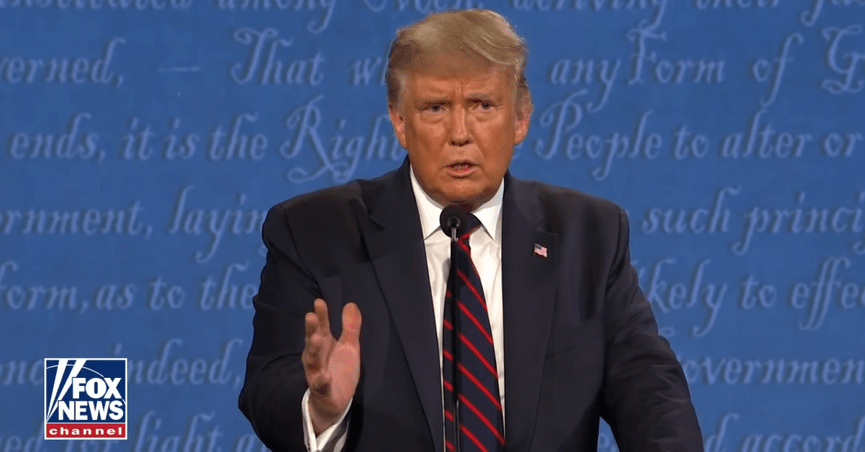 One of the biggest talking points to emerge after the first presidential debate between U.S. President Donald Trump and former Vice President Joe Biden in September 2020 was the claim that Trump had “refused to condemn white supremacists” when invited to do so.

On CNN, political commentator Van Jones emphatically made the argument that Trump had “refused to condemn white supremacy,” stating:

NOW LOOK AT WHAT IS HAPPENING ONLINE.
THIS IS NOT OKAY. pic.twitter.com/OhANFUYqNS

On Sept. 30, the day after the debate, Trump told reporters that he didn’t know who the Proud Boys were, but “whoever they are, they have to stand down, let law enforcement do their work.” Asked whether he denounced white supremacists, Trump said, without specificity, “I’ve always denounced any form, any form, any form of any of that.”

Trump hasn’t always condemned white supremacists — for example, he did not do so just hours earlier, despite being repeatedly asked to, in front of an international television audience — but he has spoken of them in condemnatory terms in the past.

In August 2017, Trump was widely criticized for saying there were “very fine people on both sides” of clashes between neo-Nazi, white supremacist, and pro-Confederate monument demonstrators, and anti-racist counter-protesters (including some antifa activists) in Charlottesville, Virginia. Those clashes came to a head when James Alex Fields, an Ohio man with ties to the American far right, murdered anti-racism activist Heather Heyer by striking her with the car he was driving.

We condemn in the strongest possible terms this egregious display of hatred, bigotry, and violence.  It has no place in America…No matter the color of our skin, we all live under the same laws, we all salute the same great flag, and we are all made by the same almighty God.  We must love each other, show affection for each other, and unite together in condemnation of hatred, bigotry, and violence.  We must rediscover the bonds of love and loyalty that bring us together as Americans. Racism is evil.  And those who cause violence in its name are criminals and thugs, including the KKK, neo-Nazis, white supremacists, and other hate groups that are repugnant to everything we hold dear as Americans.

During an Aug. 15, 2017, press conference, Trump said his earlier reference to “very fine people” pertained to demonstrators who are in favor of preserving Confederate monuments rather than removing them, and he added: “I’m not talking about the neo-Nazis and the white nationalists, because they should be condemned totally.”

In August 2019, Trump condemned “racism, bigotry, and white supremacy” after a mass shooting in El Paso, Texas, in which the suspect allegedly targeted those he perceived to be immigrants and had allegedly posted a far-right, anti-Hispanic and white supremacist manifesto. Speaking from the White House, Trump said:

“The shooter in El Paso posted a manifesto online consumed by racist hate.  In one voice, our nation must condemn racism, bigotry, and white supremacy.  These sinister ideologies must be defeated.  Hate has no place in America.  Hatred warps the mind, ravages the heart, and devours the soul.  We have asked the FBI to identify all further resources they need to investigate and disrupt hate crimes and domestic terrorism — whatever they need.”