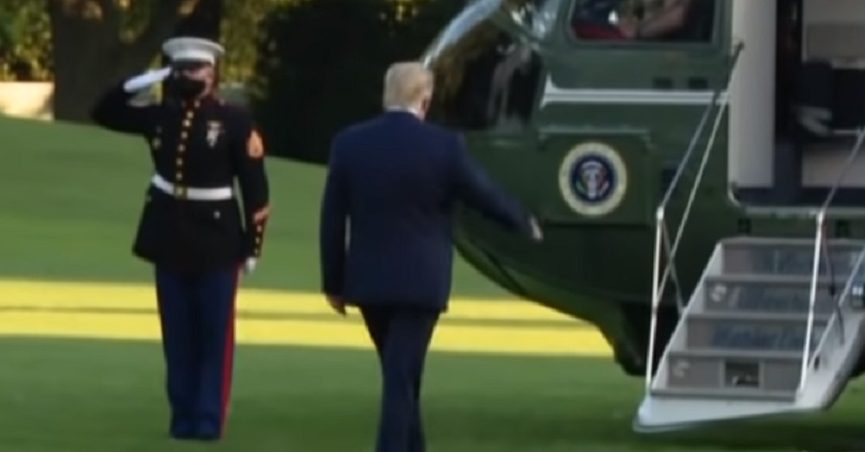 Shortly after 1 a.m. (EDT) on Oct. 2, 2020, President Donald Trump tweeted that he and his wife Melania had tested positive for COVID-19. Around 6 p.m., Trump left the White House via helicopter for treatment at Walter Reed National Military Medical Center, and doctors later acknowledged that the president had been given supplemental oxygen earlier that day.

While pictures and video hit the news showing Trump’s giving a thumbs-up to reporters as he walked to Marine One for the trip to Walter Reed, social media users circulated photographs supposedly documenting that the president was wearing a “concealed oxygen cylinder” or concentrator under his suit at that time: According to those posts, Trump was carrying a portable oxygen cylinder, or oxygen concentrator, in his right-hand suit pocket, with a cannula (i.e., thin tube), running up his back under his shirt, out behind his right ear, and then under the face mask he was wearing.

However, video clips of that event don’t back up that claim since they show no bulge in Trump’s suit pocket where the oxygen device was allegedly kept, no tell-tale track up his back where the cannula supposedly ran under his shirt, nor any tube extending out of his shirt and past his ear to his face mask:

Even the smallest of portable oxygen concentrators is bulky enough that it would have produced a noticeable bulge in a standard suit pocket, yet Trump’s pocket appeared completely flat in video of the event, as if it carried nothing: In addition, no track, ridge or bump where the cannula purportedly ran up Trump’s back was visible along the rear of Trump’s suit: Finally, what was claimed to be a cannula extending out from under Trump’s shirt collar in the “conspiracy” pictures seemed to be nothing more than a wisp of hair that looked somewhat tube-like when viewed in low-resolution images grabbed from just the right angle, and did not appear as such in other images: We would also note that if the health of the president of the United States were truly so precarious that he was unable to safely make a 30-second walk from the White House to a waiting helicopter without carrying supplemental oxygen on his person, doctors and officials would undoubtedly have made other arrangements for his transport, or closed off the scene from the press and other observers.