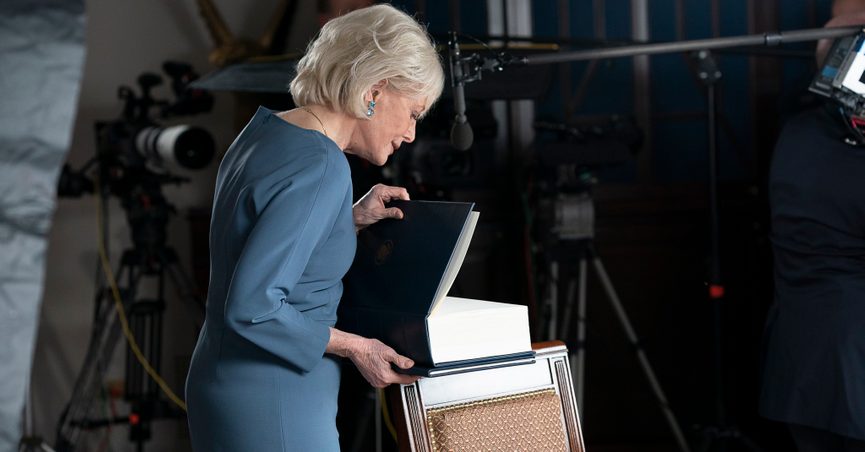 In October 2020, readers asked Snopes to examine widely shared claims that a big book of “healthcare accomplishments” given to “60 Minutes” correspondent Lesley Stahl at the White House had, in fact, been blank.

Stahl was at the White House to conduct a high-profile interview with U.S. President Donald Trump on Oct. 20, 2020. The interview became controversial in its own right when Trump, accusing Stahl of “bias, hatred and rudeness,” took the highly unusual step of releasing the White House’s own footage of the interview — three days in advance of its scheduled airing on Sunday, Oct. 25. The president bristled at Stahl’s questions throughout, and terminated the interview five minutes early.

On Oct. 20, White House Press Secretary Kayleigh McEnany tweeted out a photograph that showed her in the White House, along with Stahl, who appeared to struggle with the weight of a heavy book of what McEnany described as “just a small part of what President Trump has done for healthcare in the United States”: The following day, Trump himself posted four additional photographs of Stahl with the book, along with the following caption: “Kayleigh McEnany presenting Lesley Stahl… with some of the many things we’ve done for Healthcare. Lesley had no idea!” In one of the photographs, Stahl has opened the book and is examining what appears to be a blank page: On this basis, social media users published multiple memes and posts claiming that the entire book was blank, which many observers claimed was ironic or symbolic of what they presented as Trump’s lack of accomplishments: Those claims were false. On Oct. 21, 2020, the right-leaning Washington Examiner reported that:

The Washington Examiner has obtained a PDF of the contents, which shows its 512 pages contain 13 executive orders and 11 other pieces of healthcare legislation enacted under Trump. Further investigation confirmed that it matched the physical book’s contents. White House press secretary Kayleigh McEnany said: “This book contains all of the executive orders and legislation President Trump has signed…”

Far from being blank, its pages include passages from the Tax Cuts and Jobs Act of 2017 setting out the repeal of the individual mandate, last month’s executive order detailing Trump’s vision for healthcare, and a slew of other documents. On top were pages of another document, entitled “America First Healthcare Plan.” McEnany said: “The America First Healthcare Plan lays out President Trump’s second term vision…”

Snopes asked the White House and the Trump campaign for a digital copy of the book, or some other evidence demonstrating its contents. We did not receive a response before publication. We will update this fact check if we obtain a copy of the book ourselves.

A spokesperson for CBS News confirmed for Snopes that the book was not blank, though the page Stahl was looking at in the widely-shared photograph did happen to be blank. The CBS spokesperson confirmed that the Washington Examiner’s description of the contents of the book was accurate.