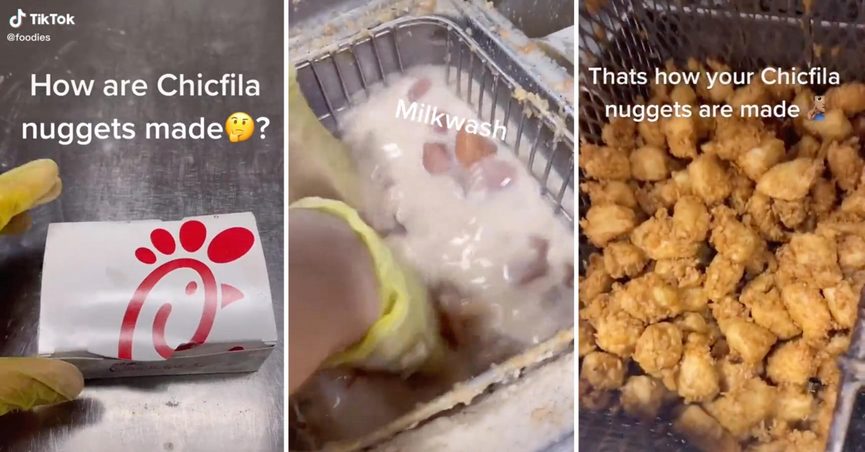 On Nov. 24, 2020, TikTok user @dxxdxx7 published a video that appeared to show the process, and partially the recipe, for preparing Chick-fil-A’s chicken nuggets. The video appeared to have been deleted on an unknown date, but was uploaded again by the TikTok user @foodies:

It is true that the video revealed the process for making Chick-fil-A’s chicken nuggets. The Atlanta Journal-Constitution reported that the “viral TikTok video shows how Chick-fil-A nuggets are made.” Chick-fil-A is based in Atlanta, Georgia.

The AJC wrote: “Cracking the code to the magic behind chicken nuggets has been a mystery for years. A Chick-fil-A employee recently blew the minds of TikTok users when the process of making the restaurant’s tasty nuggets was revealed.”

The TikTok video showed that Chick-fil-A’s nuggets recipe begins with pieces of raw chicken that are washed in milk, mixed in seasoning, sifted, and poured into oil in a Chick-fil-A-branded fryer for a number of minutes.

According to Outsider.com, the video was viewed more than 13 million times. Yahoo Life also reported that commenters seemed “confused that there was no mention of pickle juice,” a supposed “secret ingredient,” according to Taste of Home.

While the process for creating one of Chick-fil-A’s most-ordered food items might have been revealed, don’t drive to pick up a box of chicken nuggets on a Sunday. The fast food restaurant chain is famously closed that day, despite a past rumor that claimed the company was reversing this policy. Chick-fil-A’s company blog said that being closed on Sundays dated back to founder S. Truett Cathy’s original restaurant, The Dwarf Grill, which was closed on Sundays “because the diner was open 24 hours a day, and he wanted to give his team a day off to rest and to worship if they choose.”