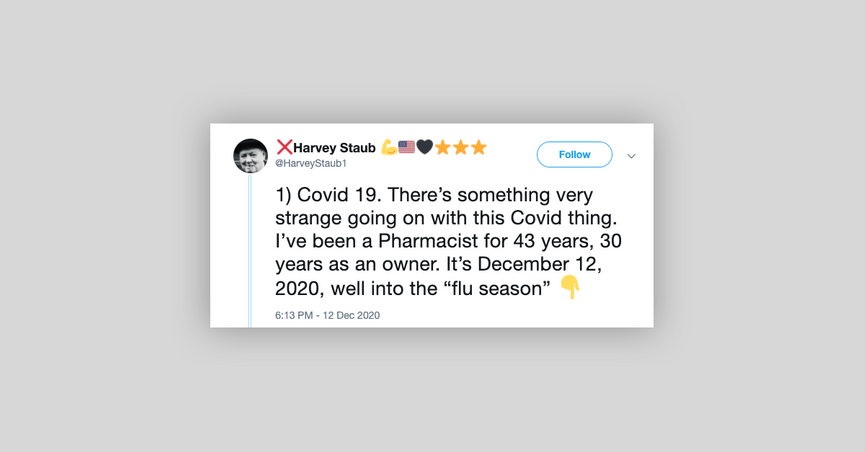 A Dec. 12, 2020, Twitter thread authored by an account using Winston Churchill as a profile picture and the user name of Harvey Staub (emojis excluded) argued that people falsely categorized as COVID-19 positive who subsequently got the flu or the common cold make the disease — and the pandemic itself — seem more dangerous than it really is. The central evidence used to support this thesis is an alleged decline in sales of the drug Tamiflu, an antiviral widely used during the flu season to hasten recovery.

The argument, partially rooted in the above fallacy, goes like this: COVID-19 tests produce high rates of false positives; COVID-19 is described as deadly, but because so many people have falsely tested positive during the flu season, the deadliness or severity of COVID-19 is exaggerated by including flu deaths as COVID-19 deaths; undiagnosed flu cases are evidenced by a lack of Tamiflu prescriptions. While we remind our readers not to take the unverified statements of anonymous Twitter accounts as truth, it is factual that there have been fewer prescriptions for Tamiflu filled this flu season. According to ABC News, “data analysts at Walgreens have tracked sales of antiviral medications for flu over the past seven years to estimate flu activity across the U.S. and 2020 has had significantly lower sales than in 2019.”

This fact can be interpreted in multiple ways. Staub interpreted it as evidence that flu cases are being under-diagnosed. Another explanation, though, is that there have actually been significantly fewer flu cases this year. The key is to defend an interpretation with actual evidence. Staub provides none. On the other hand, evidence that fewer people have contracted influenza this season, as well as data-driven explanations for why this is the case, are readily available.

For one thing, the country has been locked down and social distancing (to varying degrees) since March 2020. While this has been done to limit the spread of COVID-19, it also provides fewer opportunities to transmit the flu. With people working from home, avoiding indoor dining, and having fewer face-to-face actions, opportunities for influenza transmission are significantly —  even historically — reduced compared to an average year.

For another thing, an aggressive public health campaign encouraging flu shots to minimize the potential for co-occurring viral outbreaks resulted in historically high influenza vaccination rates this season. According to analysis based on weekly sales reports of pharmaceuticals, the IT firm IQVIA found that “23.5 million people got the flu shot from Aug. 7 through Oct. 2, compared with 12.6 million during the same timeframe in 2019.”

Even if you reject the notion that increased vaccination or reduced social contact could contribute to fewer cases of influenza, though, the fact is that the number of deaths caused by influenza and pneumonia combined in pre-pandemic years are far too low to account for the increased amount of mortality seen presently. In other words, if the signal of increased death was caused by increased influenza cases, we would be in the midst of a catastrophic flu season. This snapshot from CDC’s Weekly U.S. Influenza Surveillance Report (as of mid-December 2020) visualizes present and historical numbers of deaths caused by influenza (the yellow area) compared to deaths coded as COVID-19 (blue area): Indeed, the best refutation of the assertion that the pandemic is overhyped or manufactured is also the simplest: Significantly more people are dying, period, than would be expected based on historical data. This reality began in April 2020, well before the influenza season, and it has not abated since. The CDC collects weekly data on this metric, known as excess mortality. By doing this on a weekly basis, the metric takes into account seasonal features like the flu season. By lumping all deaths together regardless of cause, the metric is also unaffected by any perceived problem with COVID-19 testing.

Because no evidence exists to support anything close to the level of increased flu or cold cases needed to create the level of excess mortality that characterizes this pandemic, because surveillance data suggests fewer cases of influenza, and because fewer cases of influenza are to be expected in a country with record-setting flu vaccination levels that has also been socially distancing and working from home since before the flu season began, Staub’s analysis is without merit. As such, the claim is “False.”