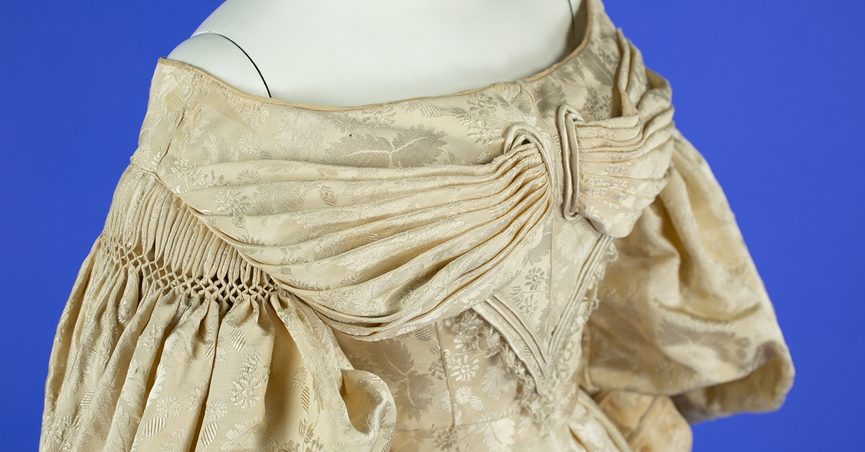 “A wedding gown represents far more than just a dress. It is also the embodiment of a dream,” said Vera Wang.

For most American brides, that dream is realized in a beautiful white wedding gown. It’s a seemingly timeless tradition that is often the center point of little girls’ wedding fantasies. In 2018, about 83% of brides wore white dresses on their big day, according to a survey by Brides Magazine. Such an overwhelming statistic begs the question: Why do we associate white with wedding gowns? And how long has this tradition existed?

They were ultimately successful, and the limitation order exempted wedding gowns. But silk was difficult to find; the war with Japan had disrupted trade routes. Nylon was also in short supply, as it was being used in place of silk to manufacture parachutes. Most wedding gowns from those years were made from acetate – except for those worn in “parachute weddings.” Some soldiers, like B-29 pilot Major Claude Hensinger, kept the parachutes that saved their lives during the war and later gave the material to their betrothed to make a gown.

Although the first records of brides garbed in white reach far back into the annals of history, it only became standard fashion over last 80 years. With the arrival of ready-to-wear clothing, brides could order affordable, mass-produced gowns based on sample sizes that were then fitted for them: a custom-made gown at a ready-to-wear price. A large, traditional wedding with the bride outfitted in a princess-style white wedding gown became a symbol of the American dream.

From WWII through the end of the 20th century, the white gown symbolized prosperity, virginity and a lifetime commitment to one person. For most people today, those meanings are gone.

White is now the overwhelming choice for most American brides, with 4 out of 5 choosing to walk down the aisle in a white gown, a sort of bridal uniform. It has become an iconic symbol of weddings, an expected part of the celebration, and despite knowing the relatively short history of the tradition of a white wedding, it was my choice as well.