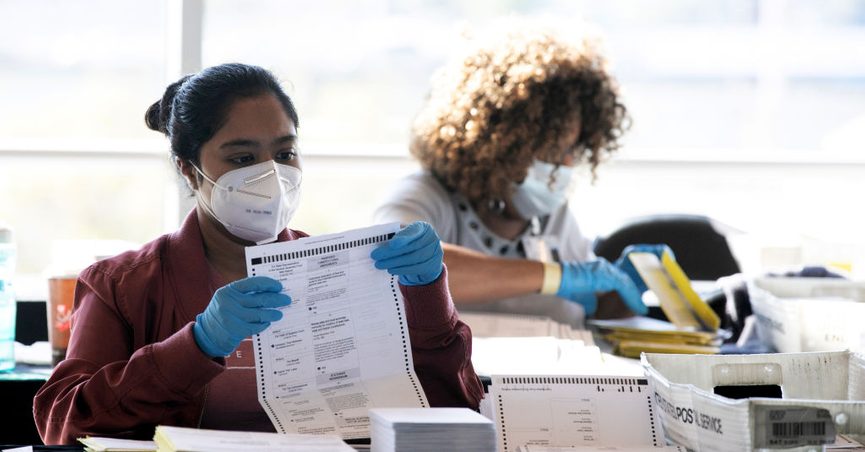 Among those testifiers were attorneys advocating on behalf of the Trump campaign, including Rudy Giuliani. They showed the committee frames of surveillance footage supposedly showing a handful of poll workers illegally counting absentee and military ballots inside a banquet room of Atlanta’s State Farm Arena on Election Day, Nov. 3, as part of a wide-ranging effort to delegitimize Biden’s win. (A Trump-requested ballot recount in Atlanta’s Fulton County concluded Dec. 4, when county elections officials certified results showing Biden the clear winner.) The presentation by the Trump attorneys was amplified by Fox News’ Sean Hannity; The Epoch Times, a website perpetuating the Trump campaign’s baseless allegations of voter fraud by nefariously marketing itself as a news operation; The Gateway Pundit, an online hub of conspiracies, and numerous social media accounts, including Trump’s. In other words, Barron alleged that a nonpartisan, state-designated monitor was present when poll workers were scanning ballots just before and after midnight. And after that, he said, an investigator with the secretary of state’s office also monitored the ballot scanning. Barron said, per Atlanta 11Alive:

What the video shows is that they have pulled out plastic bins from underneath the desks, those are bins that they keep under their desks near the scanners. They will cut those seals that are on those, open those up and pull the ballots out.

They were still in the process of cleaning so they hadn’t sealed those ballot boxes up, so they were able to just start right back up, normal processing that occurred there.

Following the Senate committee meeting featuring Pick’s testimony about the alleged “suitcases,” Republican Georgia lawmakers announced that the state House’s Governmental Affairs Committee will hold another hearing on the state’s election system Dec. 10. “Our committee will seek any credible evidence of fraud or wrong-doing and determine what, if any, legislative action may be necessary to preserve the sanctity of the ballot box,” a statement read.

In sum, no evidence showed poll workers at the Atlanta site conspired together to hide one or more ballots from Republican observers. Additionally, elections officials said the footage did not show suitcases, but rather standard bins for transporting ballots.