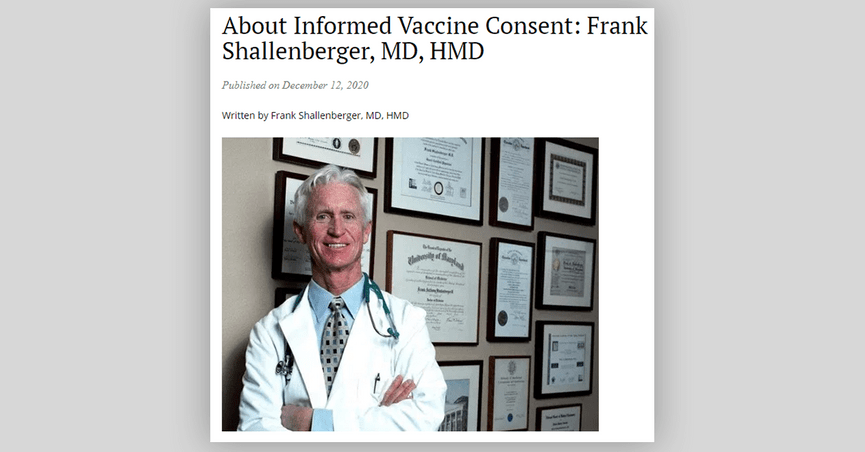 A letter allegedly authored by a controversial physician and alternative medicine practitioner named Frank Shallenberger began making the rounds on social media in December 2020. Although the letter’s content appears consistent with views he has expressed in the past, Shallenberger did not respond to our request to verify his authorship of the letter. Regardless of authorship, the post’s “bottom line” is this:

I would much rather get a Covid infection than get a Covid vaccine. That would be safer and more effective. I have had a number of Covid positive flu cases this year. Some were old and had health concerns. Every single one has done really well with natural therapies including ozone therapy and iv Vitamin C. Just because modern medicine has no effective treatment for viral infections, doesn’t mean that there isn’t one.

The post arrives at these conclusions after listing a litany of purported concerns about COVID-19 vaccination and doubts about the reality of there being a pandemic at all. In this article, we tackle the post in two different ways. First, we fact-check the post’s assertions, which are often factually incorrect and misleading, point-by-point. Second, we discuss the purported remedy of ozone therapy for COVID-19 and explain why Shallenberger’s authorship, or at least the invocation of his name, should be a red flag.

Has the Pandemic Been Over Since September 2020?

To be clear, the author of this viral post is attempting to assert that a pandemic currently killing over 3,000 Americans every day is “over.” This is neither true nor supported by anything resembling empirical evidence. For comparison, the Centers for Disease Control and Prevention (CDC) “estimates that the burden of illness during the 2018–2019 season included an estimated 35.5 million people getting sick with influenza, 16.5 million people going to a health care provider for their illness, 490,600 hospitalizations, and 34,200 deaths from influenza.”

In just the 2 1/2 months from the beginning of September (when the author of the post alleges the pandemic to have ended) to the time of the publication of this piece, the U.S. has had over 115,600 COVID-19 deaths. In total, the U.S. has had over 300,000 deaths —  an entire order of magnitude more than from influenza in the previous season.

The problem with PCR testing does not rest with false positives, though there are unresolved questions about the accuracy of COVID-19 tests in general. Rather, its limitation is that it detects only the presence of specific SARS-CoV-2 RNA, and the presence of this RNA is not necessarily indicative of being infected or contagious with SARS-CoV-2. This is not a false positive for COVID-19, it is a true positive for the presence of SARS-CoV-2 RNA. Still, the argument goes, deaths attributed to COVID-19 (discussed above) stem from falsely attributing COVID-19 as the cause based merely on the trace presence SARS-CoV-2 in people with unrelated health conditions.

To suggest the pandemic is caused by false positives is an untenable position. That’s because evidence of the pandemic in the form of excess mortality (the number of deaths compared to the number of deaths on average for any given period of time) is not sensitive to whatever result a person received on a PCR test prior to death. The figure below shows weekly deaths (from all causes) in the United States from 2017 to the present compared to the average number for that week. It shows that deaths have significantly exceeded a normal year’s totals every week since April 2020 and have been rising rapidly in just the last few weeks. It goes without saying, but this is also a big blow to the “weekly death rates in the US are now lower than they normally are during an average flu season,” line.

Are COVID-19 Vaccines Unnecessary Because of Herd Immunity?

As previously discussed, the pandemic is not over. It is, in fact, getting worse.

Who Is Frank Shallenberger?

Shallenberger is both an M.D., licensed by the Nevada Board of Medical Examiners, and an alternative medical practitioner. The Nevada Board of Medical Examiners has reprimanded him twice. Prior to setting up a practice in Nevada, he was forced to surrender his earlier California license in response to several allegations against him. While we can find no instance outside of this viral post in which he recommends ozone therapy specifically for COVID-19, he did recommend a related alternative treatment that involves breathing nebulized hydrogen peroxide as a COVID-19 cure in a March 2020 newsletter article.

At the end of the “Informed Vaccine Consent” post, Shallenberger allegedly wrote “you cannot completely trust what you hear from the media” because “they are all supported by Big Pharma and the other entities selling the COVID vaccines.” If this post was truly authored by Shallenberger, his recommendation of “ozone therapy” shouldn’t be trusted either due to his own financial interest. Shallenberger considers himself to be the “godfather of ozone therapy in the United States,” owns a medical practice that specializes in the treatment, and he is the developer of a proprietary form of ozone treatment named Prolozone. He receives money certifying other alternative practitioners in the use of ozone.

Hailed on Shallenberger’s clinic’s website as a cure for virtually anything and everything (but not COVID-19 explicitly), ozone treatment under his care involves removing a small amount of blood, adding gaseous ozone to it, and then reinjecting this gasified blood back into the body. Such a treatment, in contrast to COVID-19 mRNA vaccines, lacks any peer-reviewed study demonstrating efficacy against the disease, and the Department of Justice has taken action against people who tout ozone treatment as a cure for COVID-19. The FDA considers ozone to be “a toxic gas with no known useful medical application in specific, adjunctive, or preventive therapy,” noting that, “In order for ozone to be effective as a germicide, it must be present in a concentration far greater than that which can be safely tolerated by man and animals.”

All of this is to say that Shallenberger may not be the best source for unbiased information regarding the efficacy of ozone treatment in COVID-19 cases, and invoking his name should be considered a red flag even if someone is impersonating Shallenberger. If he truly is under the impression that the pandemic ended in September, he is probably not a great source for information on COVID-19 in general, either.