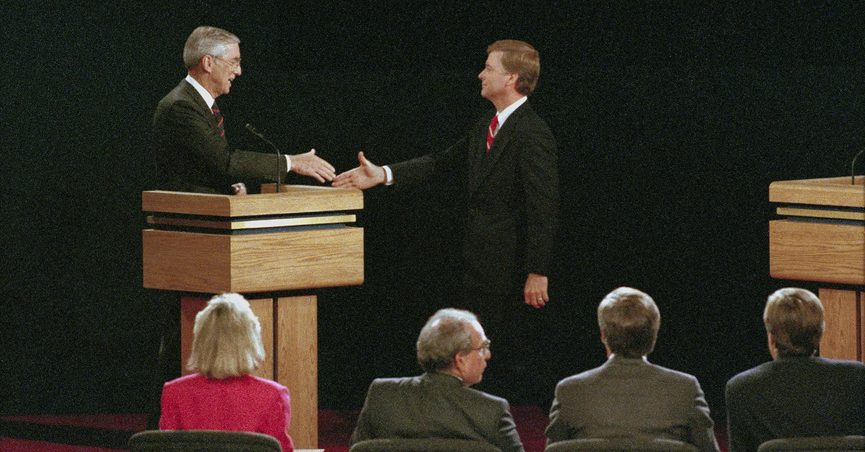 If you think that vice presidential debates – like the one on Oct. 7 between Vice President Mike Pence and U.S. Sen. Kamala Harris – have no political impact, I have two words for you: Dan Quayle.

After George H.W. Bush selected the little-known 41-year-old Senator Dan Quayle of Indiana as his running mate, the youthful-looking Quayle tried to deflect concerns about his age and inexperience by comparing himself to John F. Kennedy, who also had served as a congressman and senator before running for president in 1960.

You say ‘potato,’ he says ‘potatoe’

Quayle himself perpetuated his reputation as a dour lightweight.

In 1992 he attacked television character Murphy Brown, an unmarried news anchor, for having a child out of wedlock.

In response, late-night comic David Letterman looked straight into the camera and told Quayle to pay attention. “I’m only going to say this once. Murphy Brown is a fictional character!”

Then, in June 1992, during a trip to an elementary school, Quayle corrected a 12-year-old boy who had correctly spelled “potato,” adding an “e” to the word.

American comedians had a field day.

“It was more than a gaffe,” Quayle wrote of the p-o-t-a-t-o-e moment in his 1994 memoir, “Standing Firm.” “It was a ‘defining moment’ of the worst imaginable kind. I can’t overstate how discouraging and exasperating the whole event was.”

Quayle thought the incident got so much play because “it seemed like a perfect illustration of what people thought about me.”

Dan Quayle was a one-term vice president whose greatest contribution to politics came in a VP debate. In the dog-eat-dog world of politics, no politician since has wanted to end up on the Quayle end of the fire hydrant.