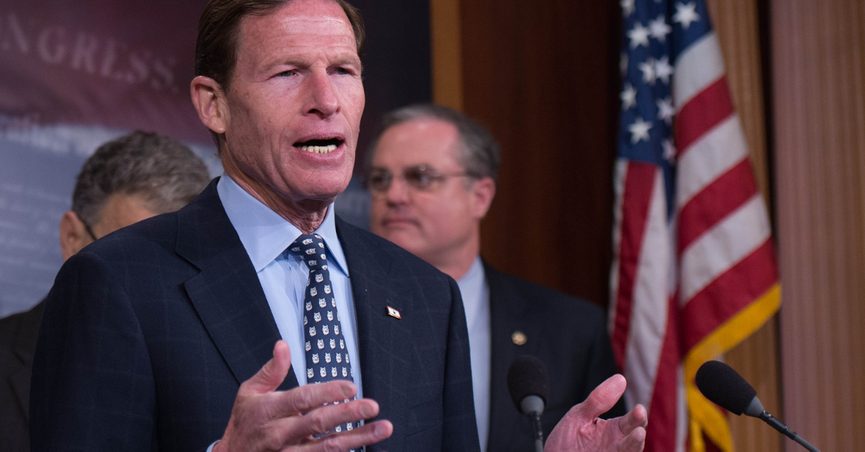 President Donald Trump’s nomination of Brett Kavanaugh to serve on the U.S. Supreme Court prompted a fierce, largely partisan battle that reached a fever pitch in September 2018 when two women accused the U.S. Court of Appeals judge of having engaged in sexual assault and misconduct while he was in high school and university.

Kavanaugh denied the allegations, but the controversy dominated political debate in the U.S. for weeks and threatened to derail the U.S. Senate’s confirmation of Kavanaugh as a Supreme Court justice.

Some supporters of President Trump and his nomination of Kavanaugh attempted to discredit the women and their associates, and the intense scrutiny associated with the saga meant that some who expressed opposition to Kavanaugh’s nomination faced a backlash of their own.

That was the case for Democratic Senator Richard Blumenthal of Connecticut, who told MSNBC on 17 September that proceeding with Kavanaugh’s nomination would “forever stain the Supreme Court”:

Going forward with this nomination will cast a shadow and stain on an institution that depends, for its power, on credibility and trust … This nomination would forever stain the Supreme Court in a way that I think may well be irreparable.

As reported by the New York Times, in March 2008 Blumenthal told a group of veterans in Norwalk, Connecticut, that “We have learned something important since the days that I served in Vietnam”:

However, Blumenthal has also at times described his military service in more accurate and modest terms. As shown in the MSNBC video above, in March 2010 (two months before the New York Times article) the then-Senate candidate directly contradicted his 2008 statement, saying that “Serving in the United States military gave me a perspective as well even in the reserves, although I did not serve in Vietnam.”

In response to the 18 May 2010 Times article, Blumenthal arranged a press conference for the following day, during which he admitted that he had “misspoken” in the past when describing his military service:

On a few occasions, I have misspoken about my service, and I regret that and I take full responsibility. But I will not allow anyone to take a few misplaced words and impugn my record of service to our country. I served in the United States Marine Corps Reserve and I am proud of it.

In response to a question about allegations that he had misrepresented his military record, Blumenthal added:

I may have misspoken — I did misspeak — on a few occasions out of hundreds that I have attended, whether events or ceremonies, and I will not allow anyone to take a few of those misplaced words and impugn my record of service. I regret that I misspoke on those occasions. I take full responsibility for it.

A few misplaced words — “in” instead of “during” — totally unintentional.

Blumenthal did not apologize for what he presented as his misstatements about his record. When invited to do so at the press conference, he merely repeated, “I regret that I misspoke and I take full responsibility.”

Blumenthal’s remarks at the May 2010 press conference can be viewed below:

It is true that Blumenthal has made a handful of recorded statements that were false or misleading about his own military service during the Vietnam War and admitted as much after the publication of the New York Times‘ investigation in 2010. However, Blumenthal insisted that these falsehoods were “totally unintentional” and claimed that he had “misspoken” rather than being deliberately or knowingly untruthful.

Blumenthal did not always describe his military service in false or misleading terms. At times he spoke more accurately and modestly about his time in the Marine Reserves, and in a 2010 campaign speech (given before the New York Times report was published), he stipulated that “I did not serve in Vietnam.”