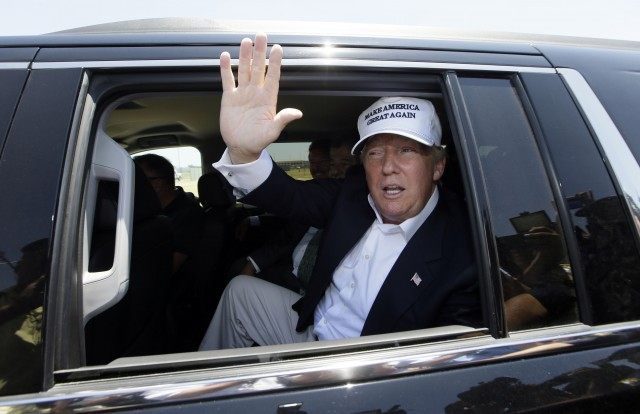 Reputed to have come from Donald Trump’s publicity people, the following tale found its way into the news media via the magazine Forbes in February 1996:

This may well be the public relations gesture of the year. During the 1995 Christmas holidays, Donald Trump and Marla Maples find themselves marooned in their stretch limo with a flat tire on a busy stretch of New Jersey highway. Finally, a passing motorist spots the limo in distress and offers to help the chauffeur change the tire. Driver says, sure. Before the re-tired limo rolls off, the darkened window rolls down and an effusive Trump asks what he and his wife can do to repay the favor. Just send my wife a big bouquet of flowers, says the guy, handing Trump a card with his wife’s name and their address. Two weeks later a gargantuan bouquet of orchids arrives with a card reading, “We paid off your home mortgage, Marla and Donald.” The Trumps flackery won’t reveal the lucky chap’s name, but Informer hears Trump forked over more than $100,000 for the gesture.

Eyebrows should have been raised by this tale, as even back in the mid-1990s it was already a recognized urban legend that had been told about many other celebrities. Casting doubt on the notion that it subsequently became a true legend was the lack of checkable details provided by Trump’s people, as exemplified by 1996 news reports that noted “The Trumps flackery won’t reveal the lucky chap’s name, but Informer hears Trump forked over more than $100,000 for the gesture.”

There was no opportunity for her to have been stranded in the rain beside an Alabama highway in the weeks leading up to her husband’s death. She was sitting with him when he passed away, and none of the newspapers that commented on her vigil made mention of a last-minute dash to the hospital, an automotive breakdown, or a helpful Samaritan who got her there in time.

Another version of the car breakdown legend gives the famous person as Perry Como and has him mailing his rescuer a set of keys to a new car. This tale is told as happening all over the place, so I wonder at Perry’s ability to buy all these people cars but not provide himself with reliable transportation.

Yet another twist has the disabled car story happening to Como’s wife, and the payoff she provides is either a color TV or tickets to her husband’s upcoming concert. It’s also told of Mrs. Leon Spinks, and the reward she grants are tickets to her hubby’s upcoming fight in New Orleans. (Moral of the story: if you want the big ticket items, don’t settle for rescuing the wife of a celebrity; hold out for the man himself.)

In February 2000, a version starring Bill Gates began circulating on the Internet:

Apparently a couple returning home from a skiing trip in British Columbia spots a disabled car at the side of the road and a man in distress. Being good citizens they stop to help. The car has either a flat tire and the Good Samaritan fixes it quickly. The man was very grateful, but had no cash with him to reward them, so asked for their name and address so he could send them a little something. A week later the couple receives a call from their banker stating that their mortgage had been paid and $10,000 had been deposited in their account by a very grateful Bill Gates.

Getting back to Donald Trump, we find that on at least one verifiable occasion he’s known to have bestowed largesse on a helpful stranger. Trump’s 79-year-old mother was mugged in 1991, suffering broken bones and severe facial bruises. A passing truck driver who witnessed the assault brought down the mugger and handed him over to justice. (The robber was later sentenced to 3 to 9 years in prison). The Donald had dinner with the rescuer, his sister, and his son; offered the Samaritan a better job; and gave him a check for an undisclosed amount.

Even with a straight news story like this, a bit of manufactured memory has changed many people’s recall of the event. There are those who now swear they saw Donald Trump hand over an oversized, Ed McMahon-type check on TV. Likely this “Publisher’s Clearing House” mental image fits in better with our notion of how a celebrity would reward an ordinary fellow, hence the substituted memory.