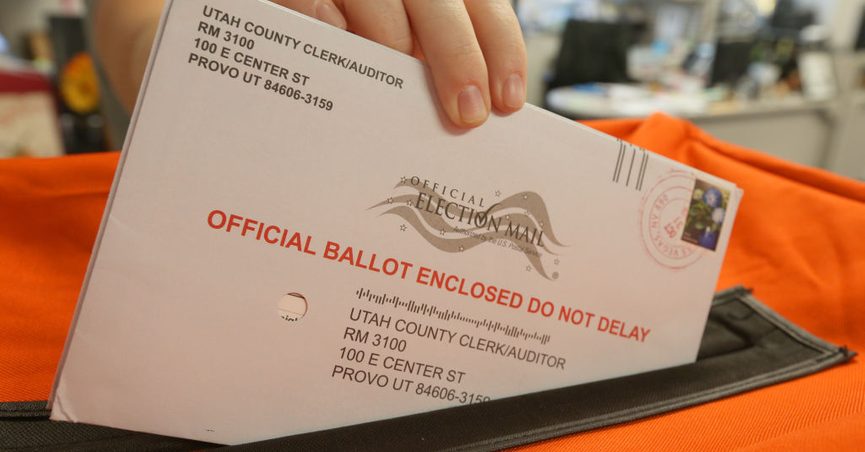 
In the days following the Nov. 3, 2020, U.S. general election, widely distributed social media posts claimed that dead (or possibly dead) voters had received and returned absentee ballots in a number of states, implying that election fraud may have occurred at the voter level.

One such allegation was the claim that a vote was recorded after having been cast by a Michigan man named William Bradley … who had died in 1984 at the age of 82.

In an interview with PolitiFact, the younger Bradley told the fact-checking site that he had received an absentee ballot for both himself and his deceased father, but he threw the latter out. Daniel Baxter, a consultant for the Detroit Department of Elections, sent the publication a statement explaining that the son’s ballot had been mistakenly logged as that of his dead father:

No ballot for the 118-year-old Mr. Bradley was ever requested, received or counted. A man with a nearly identical name requested a ballot and voted properly in both the primary and general elections. When his ballot was initially logged, however, it was incorrectly attributed to the William Bradley born 118 years ago through a clerical error.

This phenomenon occurs because identical names can sometimes be incorrectly recorded on voting rolls, both at the point of registration and throughout the ballot-recording process.

The Help America Vote Act (HAVA) was passed in 2002 in an effort to reform the nation’s voting process, including centralizing statewide voter lists. According to the Open Election Data Initiative, a nonpartisan government initiative to streamline election data, a voter list is a “detailed record of every person who is registered and eligible to vote,” but these voter lists are not always accurate.

Snopes spoke with John Fortier, a political scientist with expertise in mail-in voting at the MIT Election Data and Science Lab, who said that statewide voter lists are not perfect, though they are improving. During the 2000 general election, just seven states had statewide computerized voter databases.

“Truthfully, in many places, the voter registration lists were a local concern — one county might have their list on paper or in files, and this is because we started voting a long time before computers,” said Fortier.

Following the passage of HAVA, states centralized county voter registration lists into a computerized database, and although regular checks are conducted for individuals who have moved out of state or have died, it remains possible that a person who died two decades before the system integration began could have been missed. Although Fortier said that the Bradley incident is “surprising” and “troubling,” it does not indicate that widespread voter or election fraud is taking place throughout the system.

“We don’t have evidence that this is a widespread problem with lots of people falling into this category, but that doesn’t mean we need to condone it,” said Fortier. “Do we see lots of cases where we know dead people are voting? No. Could we improve? Yes.”

But even in the event of such a clerical error, the Michigan Secretary of State wrote in a statement shared online, safeguards are in place to ensure that such illegitimate ballots are rejected:

Ballots of voters who have died are rejected in Michigan, even if the voter cast an absentee ballot and then died before Election Day. On rare occasions, a ballot received for a living voter may be recorded in a way that makes it appear as if the voter is dead. This can be because of voters with similar names, where the ballot is accidentally recorded as voted by John Smith Sr when it was actually voted by John Smith Jr; or because of inaccurately recorded birth dates in the qualified voter file; for example, someone born in 1990 accidentally recorded as born in 1890. In such scenarios, no one ineligible has actually voted, and there is no impact on the outcome of the election. Local clerks can correct the issue when it is brought to their attention.

While room for improvement may remain, occasional clerical errors do not mean that the system is a failure. For example, Michigan has a number of mechanisms in place to ensure election security, including its improved qualified voter file system. This custom-built system is used by election officials to “efficiently and effectively maintain the state’s registered voter list” with multifactor authentication and continuous monitoring. The system automatically registers all citizens who apply for driver’s licenses or identification cards to help keep voter rolls up to date.