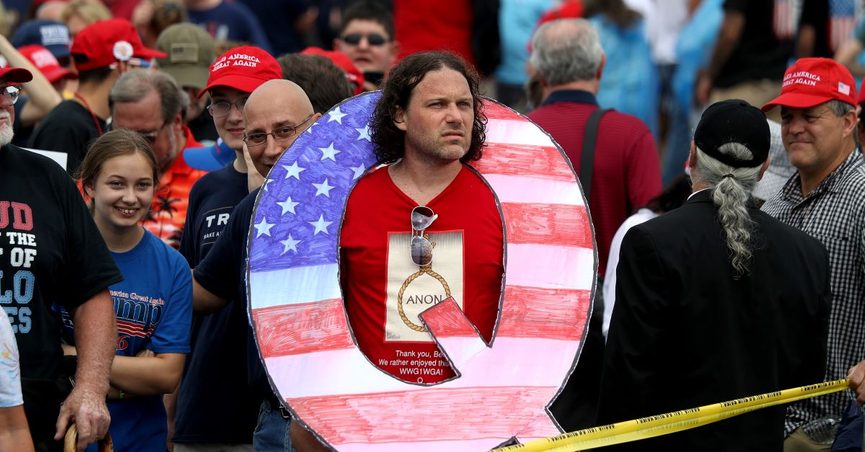 In the lead-up to the 2016 presidential election, elements of an unwieldy and unfounded conspiracy theory, QAnon (Q), were percolating on the fringes of the internet. While Q wasn’t fully Q yet, the groundwork was being laid through rumors that falsely claimed a cabal of Democratic leaders and liberal entertainers engaged in satanic rituals and global sex trafficking.

By this writing in August 2020, Q was going mainstream: A GOP candidate with a record of promoting QAnon had won a primary race in Georgia; QAnon was being regularly promoted on Fox News; and Q content was even appearing in the social media threads of U.S. President Donald Trump. When he was asked about the dangerous conspiracy theory on Aug. 19 at a news conference, he refused to condemn the group, which the FBI has identified as a domestic terrorist threat, and instead called QAnon a group of people who love their country.

As the group QAnon has grown, its tentacles have reached into all manners of political discourse, spreading lies about everything from vaccination, to Black Lives Matter, to the fight against COVID-19. It is a vehicle for disinformation, and it is quickly riding its way to the ballot in 2020. If voters aren’t aware of Q and its origins, they should be.

So What Exactly Is QAnon?

QAnon refers to a group of people who have built a belief system by extrapolating meaning from cryptic messages that were posted by an anonymous person(s) on various internet forums.

The vagueness of this odd statement left it open to interpretation. To some, it was just a silly remark. To QAnon, it was a secret code word to signal that mass arrests were imminent.

What Is the ‘Great Awakening’?

While QAnon may seem a bit dark — with all of its talk about pedophilia, sex trafficking, and satanic rituals — there is light at the end of this fictitious tunnel. The Great Awakening, a term borrowed from religious revivals throughout history, is the idea that after “the storm” we’ll see a period of enlightenment as the evils of the deep state are destroyed.

How Has QAnon Evolved?

When QAnon first emerged, it was largely concerned with various political players connected to the 2016 presidential election. In the ensuing years, however, this conspiracy theory has seeped into all manners of political discourse. Elements of Q can be found spreading misinformation related to Black Lives Matter, vaccinations, and the COVID-19 pandemic.

Brandy Zadrozny, an NBC News reporter whose health misinformation beat has been increasingly intertwined with QAnon, said that these conspiracy groups use nearly identical tactics to increase their reach and spread misinformation.

In a podcast interview with “Lawfare,” Zadrozny described two main tactics used by QAnon and the anti-vaccination movement. First, they create an enemy. Second, they create fear. The first item gives people something to rail against, while the second gives them a noble purpose for their cause.

[QAnon and anti-vaccination groups] are almost exactly the same in terms of ideology and tactics. What’s changed is the players, right? So take out John Podesta and Hillary Clinton and Obama and you can put in Dr. Fauci and Bill Gates and whoever your local county health policy maker is. And they are the bad guys, and you go after those bad guys relentlessly. You create these entire fantasies surrounding, if we’re talking about anti-vaccination groups, around Bill Gates and Big Pharma and “all of these children are dead.” There’s a very pure reasoning behind this: “We’re out to save children,” both groups say constantly. But what they’re doing is leveraging social media to create these harassment campaigns against anyone who is against them. And again with tactics, they are both so so good at cross pollinating different groups who may also have a distrust of institutions.

I have been saying it’s like the “boss” level because before […] one of us [reporters] would take political extremism, one of us could take medical or health extremism and misinformation and have out beats, but now they are just doing everything in a sort of lock-step. And the largest anti-vaccination group is very much a QAnon group, and so they have really managed to boost their numbers, and so has QAnon. They’ve both been able to feed on that distrust. And the distrust in institution is the thing that binds all conspiracy theories. That’s what they have to keep going. This fear. Just supplying this fear in inordinate amounts. Whether it’s the fear of your child being injured or killed with a vaccine, or your child being swept up in this sex trafficking ring. It really is just all so similar.

What Does Trump Have to Say About This?

Trump has retweeted content made by QAnon conspiracy theorists, but he has largely refrained from talking directly about Q. That is, until Aug. 19, 2020, when he was asked about the conspiracy theory during a press conference.

President Trump on Wednesday offered encouragement to proponents of QAnon, a viral conspiracy theory that has gained a widespread following among people who believe the president is secretly battling a criminal band of sex traffickers, and suggested that its proponents were patriots upset with unrest in Democratic cities.

“I’ve heard these are people that love our country,” Mr. Trump said during a White House news conference ostensibly about the coronavirus. “So I don’t know really anything about it other than they do supposedly like me.”

When told by a reporter about the central premise of the QAnon theory — a belief that Mr. Trump is saving the world from a satanic cult made up of pedophiles and cannibals connected to Democratic Party figures, so-called deep-state actors and Hollywood celebrities — Mr. Trump did not question the validity of the movement or the truth of those claims.

Instead, he offered his help.

“Is that supposed to be a bad thing or a good thing?” the president said lightly, responding to a reporter who asked if he could support that theory. “If I can help save the world from problems, I am willing to do it. I’m willing to put myself out there.”

Let’s end this article the same way we started it, with a simple question:

Over the last few years, a section of the internet has been involved in a sort of “game” in which people extrapolate meaning from cryptic messages on internet forums posted by an anonymous person claiming to be a high-ranking government official known as “Q.” While this supposed government insider has repeatedly made incorrect predictions, followers of QAnon have become convinced of a “deep state” cabal of satanic, baby-eating, child sex-traffickers led by prominent members of the Democratic party, and they believe Trump is the only one who can stop it.

While this conspiracy theory was once relegated to the fringes of the internet, it has since made serious headway into mainstream politics. Despite being labeled as a threat by the FBI, supporters of QAnon have found some success in their efforts to seek political office, earning more than a half million collective votes and, arguably, receiving support from the highest office in government.

QAnon is no longer a fringe conspiracy theory. It is a popular ideology that teaches people to reject reality and distrust institutions. While “the storm” may never arrive, Q is already here.