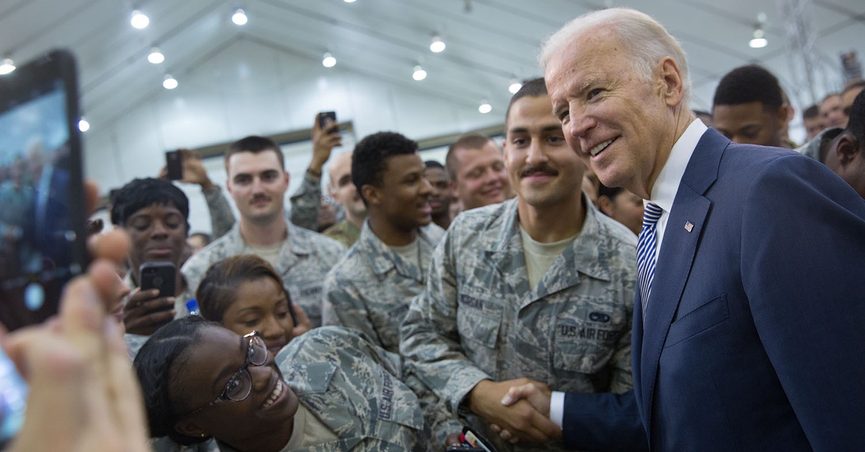 In September 2020, a few weeks after The Atlantic reported that U.S. President Donald Trump had disparaged members of the military by calling them “losers” and “suckers,” an old video purportedly showing Democratic presidential candidate Joe Biden calling a group of troops “stupid bastards” during a speech was widely circulated on social media.

The video was shared on Trump’s official YouTube page under the title: “Joe Biden called American servicemembers ‘stupid bastards.’ He must apologize!”

This is a genuine clip from a speech that Biden — then vice president — delivered in 2016. However, Biden’s comment was made in jest, just moments after he told the troops how much he appreciated their sacrifice. Even the right-wing website Breitbart reported that Biden had “jokingly” made this remark about the troops, writing: “Former Vice President Joe Biden jokingly referred to members of the U.S. military and its overseas coalition partners as ‘stupid bastards’ while making banter with troops during a 2016 trip to the United Arab Emirates.”

The above-displayed video comes from a speech Biden gave to a group of troops in the United Arab Emirates on March 7, 2016. A video of Biden’s full remarks that was uploaded to YouTube by the Washington Examiner provides some additional context to the “stupid bastards” remark.

Biden told the crowd that he had made repeated visits to overseas troops multiple times over the years, and that he wished the citizens of the United States could do the same so that they could truly appreciate the “incredible sacrifices you make for our country.” Biden then went on to make a playful remark about how his good judgement could be demonstrated by two decisions that he made during his life: the first was marrying his wife, Dr. Jill Biden. The second was appointing Johnson — a soldier on the stage — to the academy. When this line did not receive the applause Biden expected, he jokingly said “Clap, you stupid bastards.”

Biden campaign spokesperson Andrew Bates told The Daily Beast: “Vice President Biden was jokingly encouraging the audience to clap for an airwoman on the stage, and a number of service members can be seen laughing and smiling at the comment. Seconds before, he praised them for ‘the incredible sacrifices [they] make for our country.’”

Here’s a transcript of Biden’s remarks:

And I want you to know notwithstanding what you may hear about me, I have incredibly good judgment. One, I married Jill. And two, I appointed [Lt. Karen] Johnson to the academy. I just want you to know that. Clap for that, you stupid bastards. (Applause.) Come on, man. Man, you are a dull bunch. Must be slow here, man. I don’t know.”

Here’s the full video of Biden’s speech. The moment seen in the viral clip can be viewed at around the six-minute mark: