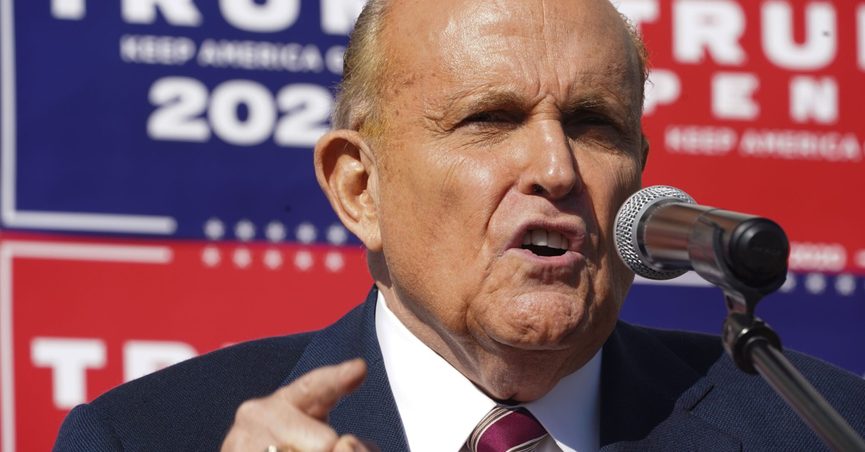 In the aftermath of the 2020 general election, outgoing U.S. President Donald Trump made several unfounded claims that electoral fraud had played a telling role in Democratic candidate Joe Biden’s projected victory over him. As part of that broader effort to undermine public confidence in the validity of the results, Trump’s campaign pursued lawsuits in several key states, including Pennsylvania.

In mid-November, attorneys who had been taking part in the campaign’s litigation in federal court in Pennsylvania stepped down and were replaced in part by Trump’s personal lawyer and former New York City Mayor Rudy Giuliani.

On Nov. 17, Judge Matthew Brann oversaw oral arguments at the U.S. District Court for the Middle District of Pennsylvania in the case of Donald Trump for President Inc. vs. [Pennsylvania Secretary of State] Kathleen Boockvar et al. Several noteworthy quotations, attributed to Giuliani, emerged on social media later that day.

One meme in particular took what it described as quotations from Giuliani and matched them with still images of Charlie Kelly, a character from the FX sitcom “It’s Always Sunny in Philadelphia” who has poor literacy skills, low intelligence, and often displays an inability to grasp basic logical concepts. One of the show’s many running jokes about Kelly is that, without any basis or qualifications, he describes himself as an expert in “bird law,” and occasionally tries to pass himself off as an attorney.

Your honor, we’re not asking that 6.8 million votes be cancelled, we’re asking that the votes that were counted without inspection — which are approximately 680,000 votes — be deemed null and void, as you would with any violation of the absentee ballot requirement… In this particular case, your honor, it was a plan that was carried out in two different jurisdictions [Allegheny County and Philadelphia County], not the others, to make certain that, uniformly, Republicans got no opportunity to observe. The conduct was egregious, the conduct was premeditated… The remedy is really required and is draconian, because their conduct was egregious. Who ever heard of 600,000, 700,000 absentee ballots not being examined? It’s never happened in American history… As far as we’re concerned, your honor, those ballots could have been for Mickey Mouse. We have no idea.

Giuliani’s apparent confusion over the term “strict scrutiny” was a particular source of concern, since it described what should be a fairly basic legal and constitutional concept. Roughly speaking, “strict scrutiny” is a standard used by courts to decide whether a certain law is constitutional. It means that an especially high standard of justification is required any time the state seeks to curtail a fundamental right or to engage in or facilitate some form of discrimination, and the state has the burden of proving that its actions or policies are not unconstitutional.

At one point in the oral arguments, Brann asked the Trump campaign’s legal team for their opinion on what standard of review he should use in the case at hand. The following exchange ensued:

Brann: What standard of review should I apply, and why? What standard of review should I apply in this case —
Giuliani: On a motion to dismiss? I mean I think the normal one, which is that you, you have to deem the factual allegations to be correct, and even if they are correct, you have to find that there’s no merit, no legal merit, no legal theory on which we can get relief.
Brann: Well let me ask you then, are you arguing strict scrutiny should apply here?
Giuliani: No, the normal scrutiny should apply. If we had alleged fraud, yes. But this is not a fraud case.
Brann: …So if that’s the case, why don’t Secretary Boockvar’s and the counties satisfy the standard of review you’re talking about? If it’s not strict scrutiny, and it’s the standard of review you’re implying, why don’t their actions satisfy this?
Giuliani: I’m sorry, I don’t really understand the question, your honor.
Brann: Well this is how I would look at it. I would think that it’s a standard of review of strict scrutiny, potentially. You’re not sure that that’s the case. I’m not imposing my —
Giuliani: Maybe I don’t understand what you mean by “strict” —
Brann: Well, for strict scrutiny to apply, a fundamental right needs to be burdened, as I understand it. So how do the counties or Secretary Boockvar, on behalf of the commonwealth, burden the plaintiffs’ right to vote? How do they burden the right to vote?