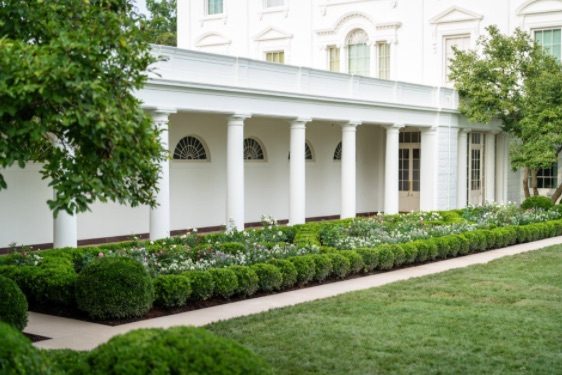 First lady Melania Trump unveiled a newly renovated White House Rose Garden on Aug. 22, 2020, posting images to Twitter of a neatly manicured space. The news sparked a backlash among those unhappy with the new design.

People shared their opinion about the renovation on social media, alongside images showing the garden before and after the renovation. The “before” images were more colorful, showing spring flowers and crab apple trees in bloom. The “after” images featured more green with white and pastel blooms, and the crab apple trees were gone.

Before and after photographs of newly renovated White House Rose Garden:
courtesy #Getty and @marycjordan pic.twitter.com/w6bzoNHMjC

In terms of the claim about Trump’s removing rose bushes planted by every first lady since 1913, McDowell pointed to a landscape report completed in 2020 by the Committee for the Preservation of the White House, noting that flower plants in the garden have continually been removed and replaced.

“Is the garden outside your back door the same as it was 60 years ago? That’s what people are suggesting,” McDowell said, adding, “Roses don’t live that long.”

McDowell also stated that although the idea that current first lady Melania Trump dug up the Rose Garden planted by former first lady Jackie Kennedy made for good internet outrage, that was false framing of the conversation.

It was former U.S. President John F. Kennedy who designed the Rose Garden when it was renovated in 1962, although he tapped his wife’s close friend, horticulturalist Bunny Mellon, to accomplish the task. Mellon recounted that Kennedy approached her about the project after returning from a trip abroad:

He and Mrs. Kennedy had just returned from a state visit to France, followed by stops in England and Austria. The President had noted that the White House had no garden equal in quality or attractiveness to the gardens that he had seen and in which he had been entertained in Europe. There he had recognized the importance of gardens surrounding an official residence and their appeal to the sensibilities of all people.

He wanted to start, in the greatest haste, to remake the area near his office at the west end of the White House, known as the Rose Garden, into an area both useful and attractive. Would I design it for him? It was a startling request to say the least.

Melania Trump said that the 2020 renovation “returned the garden to its original 1962 blueprint designed by Bunny Mellon during the Kennedy Administration.” Trump also said that the renovation improved utilities, infrastructure, and added a paved path, increasing access to the garden for people with disabilities.