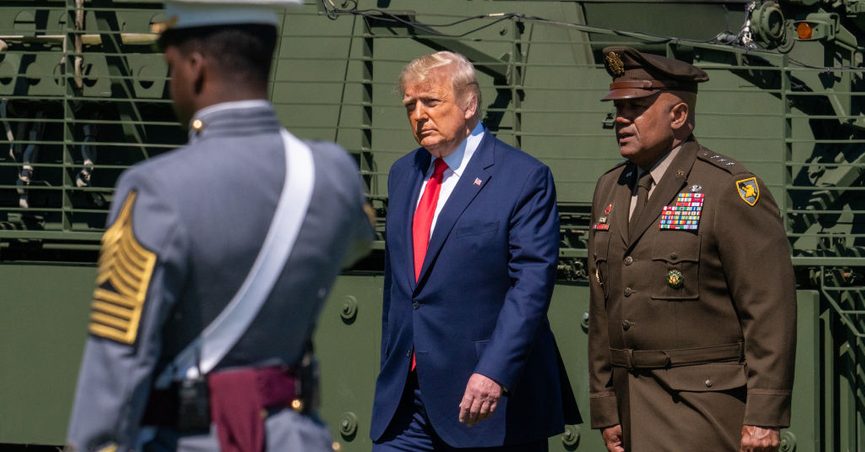 One claim that has often been repeated by U.S. President Donald Trump is that he rebuilt a military that was “totally depleted” by his predecessor, Barack Obama. Trump’s grievance is based on a grain of truth — military spending was reduced during Obama’s second term — but Trump’s statements on the matter have combined distorted facts with outright falsehoods.

What Trump Has Said

The way Trump tells it, the United States military was in a complete shambles when he took office. Over the years, Trump has made a variety of statements in order to perpetuate this notion.

In one oft-repeated story, Trump illustrated his claim that Obama depleted the military by saying that the armed forces had “no ammunition” when he took office. In October 2019, for instance, Trump said: “When I took over our military, we did not have ammunition.”

This is not true. The military did not run out of ammunition during the Obama administration (or during any other administration, as far as we can tell).

Todd Harrison, the director of Defense Budget Analysis for CSIS, examined Obama’s budget for fiscal year 2017, the budget that would be in place when Trump took office, and found that “nearly every measure of force structure — the number of brigades, aircraft, ships and subs, marine battalions, and end strength — [was] smaller than when the [post 9/11] buildup began.” However, this “smaller force consumes a budget more than 50 percent larger in real terms than before 9/11. The military is spending more for a smaller force.”

Why Was Military Spending Reduced During Obama Administration?

Though it is certainly not accurate to say that the military did not receive any funding during the Obama administration, there was truly a reduction in spending. Two major factors resulted in reduced spending. First, congress placed restrictions on military spending in 2011 in an attempt to reduce the national deficit. And second, the Obama administration started to withdraw troops from Afghanistan and Iraq.

Here’s how The New York Times explained the impact of the congressional sequester on military spending:

In 2011, in response to a debt ceiling crisis, lawmakers reached a bipartisan agreement to reduce deficits by at least $2.1 trillion over the next decade. In addition to limits on domestic spending, limits were placed on the Pentagon’s base budget, but not its wartime spending.

Congress increased spending caps by $32 billion in 2013 and $40 billion in 2015, referred to by budget watchers as “partial sequester relief.” In February, the cap was blown off entirely, when Mr. Trump signed a budget deal that raised it by $165 billion over two years. Effectively, that ended the sequester without repealing the original law.

From 2012 to 2017, the Pentagon’s annual budget had decreased as a percent of the economy. But it still hovered around $600 billion — a far cry from “no money” at all.