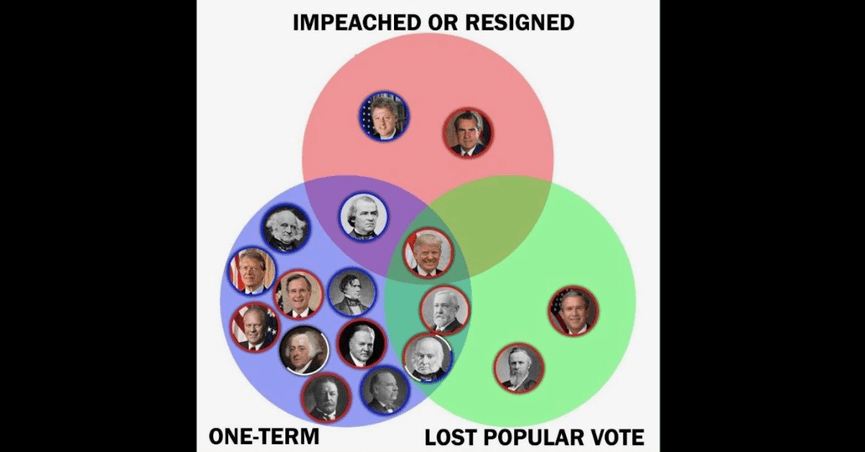 In the aftermath of Democratic candidate Joe Biden’s projected victory in the 2020 U.S. presidential election, social media users, primarily those gratified by the defeat of incumbent President Donald Trump, shared a Venn diagram that indicated he was the first president in U.S. history to be impeached and lose the popular vote and lose his reelection bid.

To illustrate the popularity of the graphic, in the days after major news organizations projected Biden as the winner on Nov. 7, 2020, the following screenshot shows instances of it on Facebook: The graphic purported to show three intersecting cohorts of American presidents: those who failed to be reelected as incumbents; those who won while losing the popular vote; and those who were “impeached or resigned.” According to the diagram, Trump is the only president to have fit all three of those descriptions. The Venn diagram was shared by several prominent journalists and activists:

Fifteen American presidents sought reelection as the incumbent, but failed. Based primarily on records held by the American Presidency Project at the University of California-Santa Barbara, they were:

Three sitting presidents have been impeached by the U.S. House of Representatives. None has been convicted by the U.S. Senate and removed from office. As we have previously examined in greater detail, the two impeached presidents before Trump were Andrew Johnson, in 1868, and Bill Clinton, in 1998.

The following table provides a summary of our findings and underlines the accuracy of the core claim in the November 2020 “Venn diagram” meme — that Trump was the first president in American history to be elected while losing the popular vote, and then subsequently impeached before failing in his bid to be reelected as the incumbent.