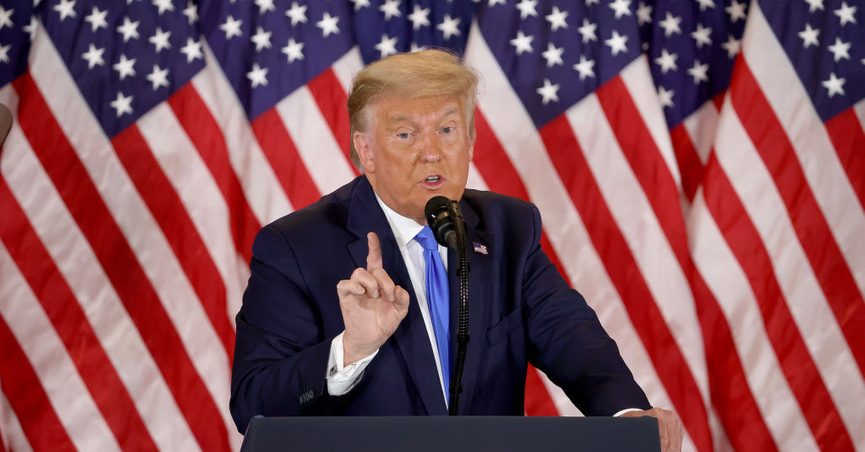 In the early hours of Nov. 4, 2020, U.S. President Donald Trump, surrounded by his family and closest advisers, delivered an extraordinary and unprecedented speech from the East Room of the White House, in which he prematurely claimed he had won the 2020 presidential election, describing the continued counting of millions of outstanding ballots in several key states as “a major fraud on our nation.”

Along the way, Trump made several factually inaccurate or grossly misleading claims in support of his argument that vote counting should stop, and that he should be certified as the winner.

The following is a transcript of that speech, broken into its constituent parts, and fact-checked by Snopes. Readers can watch the speech in full, available below, as they read our analysis:

Ohio was declared for Trump relatively early on election night. According to unofficial data published by Ohio’s Secretary of State, and consulted by Snopes at around 2 p.m. EST on Nov. 4, Trump won the state by 8.1%, or 470,737 votes — just as Trump had claimed in his speech. Likewise, the president won Florida handily. As of 2:30 p.m. EST on Nov. 4, The Associated Press gave him a lead of 3.4%, or 375,039 votes (very close to the total Trump claimed in his speech), with just four% of votes remaining.

As we have already made clear, Trump had not won the state of North Carolina at the time he said “we won there.”

“A major fraud on our nation”

This is a fraud on the American public. This is an embarrassment to our country. We were getting ready to win this election. Frankly, we did win this election. So our goal now is to ensure the integrity — for the good of this nation, this is a very big moment. This is a major fraud on our nation. We want the law to be used in a proper manner. So we’ll be going to the U.S. Supreme Court. We want all voting to stop. We don’t want them to find any ballots at four o’clock in the morning and add them to the list. Okay? It’s a very sad, it’s a very sad moment, to me this is a very sad moment. And we will win this and, as far as I’m concerned, we already have won it. So I just want to thank all, I want to thank all of our support, I want to thank all of the people that worked with us and, Mr. Vice President, say a few words, please. Please.

This was without doubt the most outrageously dishonest section of the president’s speech, and a set of claims that will likely enter the history books. Trump’s repeated claim that he had already won the election was without factual basis, and an unprecedented and potentially dangerous departure from American democratic norms. At the time he made those remarks, he had not won the election, and had not won it by the time this article was published, either.

The 2020 presidential election will not have an official winner until each state and territory formally certifies its results, and no credible winner will be announced until the pattern of tallies mean one candidate has, in effect, a realistically unassailable lead in the electoral college. Trump was nowhere near such a position when he said “frankly, we did win this election,” in the early hours of Nov. 4.

In Michigan, for example, a state where Trump touted his lead by saying, “Wow, that’s a lot,” Biden had already overtaken the president by the following day, and news outlets ultimately declared the Democrat the winner there, and in the potentially crucial state of Pennsylvania, millions of votes remained to be counted.

The president’s pledge to go to the Supreme Court made little sense, since the counting of votes had not been completed, so there were no actual results to dispute or contest at that time. It’s possible that Trump intended to ask the Supreme Court to order a halt to the initial counting of votes, which would be an unprecedented request that the court would be sure to laugh off as unconstitutional.

Trump’s exhortations that “We want all voting to stop” and “We don’t want them to find any ballots at four o’clock in the morning” also made no sense, but continued the narrative of what appeared to be his broader misunderstanding of the rudiments of the electoral process: Votes are cast, valid votes are counted, and each state declares and certifies a winner. Whether a ballot is counted immediately after the polls close, or “at 4 o’clock in the morning,” or in the days that follow, once it is cast and counted in accordance with the law, it must be counted.