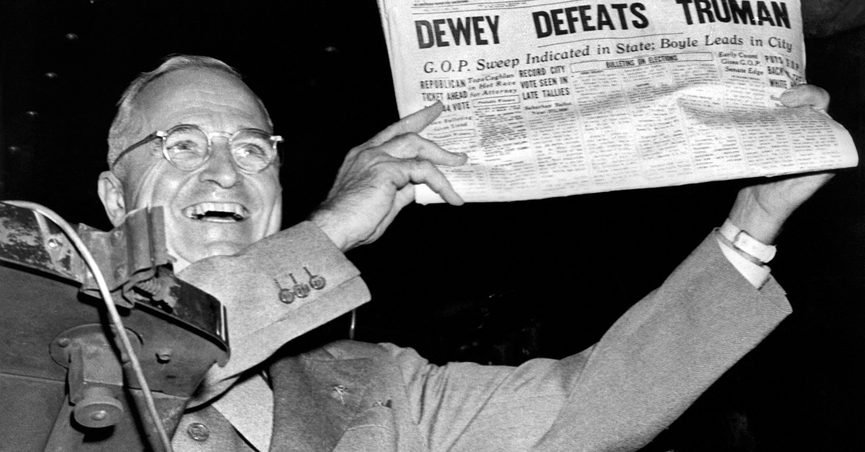 The question looms in nearly every U.S. presidential election, even in this year’s race: Could the polls be wrong? If they are, they likely will err in unique fashion. The history of election polling says as much.

That history tells of no greater polling surprise than what happened in 1948, when President Harry Truman defied the polls, the pundits and the press to defeat Thomas E. Dewey, his heavily favored Republican foe.

In 1936, the Digest employed the same methodology that had served it so well. After sending 10 million postcard ballots and tabulating the 2.3 million returned from around the country, the Digest reported that Republican Alf Landon was bound for a comfortable victory over President Franklin D. Roosevelt.

Landon ended up carrying two states – Maine and Vermont – and lost the popular vote by 24 percentage points. Roosevelt’s victory was one of the most lopsided in presidential election history.

That also was the year Gallup, Crossley and Elmo Roper initiated their election polls, which relied on smaller samples than the Digest. With varying degrees of accuracy, all three newcomers in 1936 signaled Roosevelt’s victory.

The Digest’s debacle offers an enduring reminder that the roots of polling failure run deep. The stunning miscall occurred at the dawn of modern survey research and introduced a nagging sense about polling’s potential to mislead.

After all, if the great election oracle of its time could err so spectacularly, why would other polls be immune to failure?

The answer: They weren’t, and aren’t, immune.