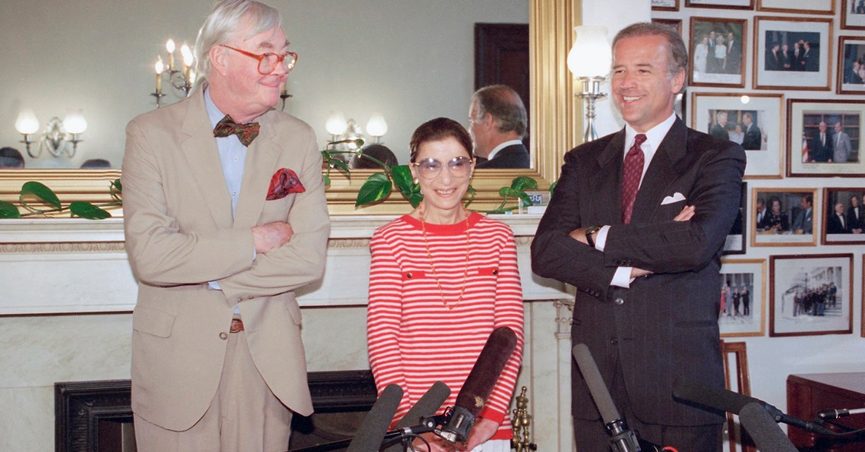 Chief Justice John Roberts announced in a statement that “Our nation has lost a jurist of historic stature.”

Wiesenfeld’s wife had died in childbirth, so he was denied benefits even though he faced all of the challenges of single parenthood that a mother would have faced. The Supreme Court gave Wiesenfeld and Ginsburg a win in 1975, unanimously ruling that sex-based distinction unconstitutional.

And two years later, Ginsburg successfully represented Leon Goldfarb in his challenge to another sex-based provision of the Social Security Act: Widows automatically received survivor’s benefits on the death of their husbands. But widowers could receive such benefits only if the men could prove that they were financially dependent on their wives’ earnings.

Ginsburg also wrote an influential brief in Craig v. Boren, the 1976 case that established the current standard for evaluating the constitutionality of sex-based laws.

Like Wiesenfeld and Goldfarb, the challengers in the Craig case were men. Their claim seemed trivial: They objected to an Oklahoma law that allowed women to buy low-alcohol beer at age 18 but required men to be 21 to buy the same product.

But this deceptively simple case illustrated the vices of sex stereotypes: Aggressive men (and boys) drink and drive, women (and girls) are demure passengers. And those stereotypes affected everyone’s behavior, including the enforcement decisions of police officers.

Under the standard delineated by the justices in the Boren case, such a law can be justified only if it is substantially related to an important governmental interest.

These are only some of the Supreme Court cases in which Ginsburg played a prominent part as a lawyer. She handled many lower-court cases as well. She had plenty of help along the way, but everyone recognized her as the key strategist.

In the century before Ginsburg won the Reed case, the Supreme Court never met a gender classification that it didn’t like. Since then, sex-based policies usually have been struck down.

I believe President Clinton was absolutely right in comparing Ruth Bader Ginsburg’s efforts to those of Thurgood Marshall, and in appointing her to the Supreme Court.